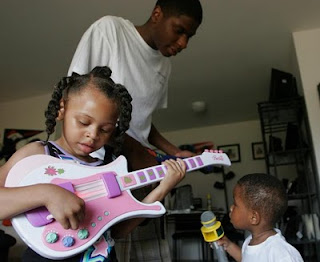 Adrian McLemore with his niece and nephew Arayiah McLemore, 3 and Tyiaun Jones, 1, play guitar and sing to Tina Turner in their home in Trotwood. McLemore grew up in Montgomery County’s foster care system. In order to prevent his niece and nephew from becoming wards of the county due to a family crisis, McLemore took custody of the children.

McLemore knew that one day he might be faced with this decision given his sister’s background, but hoped this day would not come. The Trotwood resident loves his family and considers himself a brother and uncle who would always come to his family’s rescue in a time of need. But being a full-time surrogate father was not a part of his original life plan. Like his mentors said, this would be a great responsibility for a 23-year-old bachelor enrolled in college and managing a video store.

The decision to take custody of 3-year-old Arayiah and 1-year-old Tyiaun was not about what would interrupt McLemore’s life, but rather stopping the beginning of a family trend. “I refuse to let a second generation of the McLemores be in foster care,” he said.

McLemore, now 24, and his two sisters spent most of their childhood in foster care. They entered the system in Georgia as their mother battled alcoholism. The siblings ended up in Georgia after their mother moved them there from Florida following a divorce from their father in 1992.

The McLemore siblings would not be reunited with their father until 1995. Adrian McLemore was about to be put up for adoption when Ernest McLemore, who was serving in the U.S. Air Force, obtained custody and moved his children to Las Vegas. They lived with their father for two years before he announced that he had received an assignment overseas and gave them the option of moving to Ohio to live with their mother again. The children moved back with their mother, a decision that has Adrian and his older sister Britney McLemore, 24, asking themselves today, “what if?”

All three siblings were in and out of Daybreak, an emergency shelter for runaway and homeless youths, from 1999 to 2000.

At one point, Adrian McLemore did not want to return home, so shelter officials called Montgomery County Children Services, who placed him and his sisters in foster care. Britney and Adrian aged out of the system at age 18, and their younger sister, Devanna, was placed in Britney’s custody once Britney turned 21. At the time, Devanna was pregnant with Arayiah, who would have also become a ward of the county had Devanna remained in foster care.

Meanwhile, Ernest McLemore died in 2004 in Georgia at age 40 after suffering from brain cancer. His children were still in foster care.

Even though his time with his children was short, Ernest McLemore was a big influence. Adrian hopes that all the positive things that he learned from his father will help him while his niece and nephew are in his custody.

One of the messages that McLemore said he hopes his actions will send to Arayiah and Tyiaun is that “a man loves his child no matter what” and provides emotional and financial support for his family.


“I am convinced that I made the right decision based on where they are now — as far as development — compared to where they were the day I picked them up,” he said.

“I love them to death. I want to show them that I am here to play, to hug or discipline... Just to be there.”

Although McLemore’s experience in foster care has been mostly positive, he still said he feels “foster care is no system for children.”

He also didn’t like the idea of his niece and nephew potentially being placed in separate foster homes without a familiar face.

“Having a second generation of our family in foster care is unthinkable to me and I wouldn’t allow it,” he said.

Devanna McLemore, 21, was the one who suggested to county officials in 2009 that her brother take custody of her children. She currently has weekly visits with them and her next custody hearing is scheduled for January.


This year, Father’s Day takes on a whole different meaning to Adrian McLemore. He believes his father would be proud of the decision he made. “I could have continued to do what I wanted to do. But instead, I now do what I have to do.”
Posted by Lisa at 6:38 AM No comments:

Hooray for more A.C.T.I.O.N. in Athens!   They just had their Second Annual Foster Care Walk...