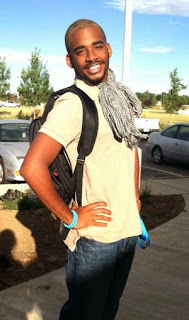 BEAVERCREEK — John Davis does not claim that living in a foster care group home for three and a half years was the ideal place to grow up. He does, however, acknowledge that Greene County Children Services’ Alpha Group Home was safer and more stable than the situation in which he had formerly been. He also says that his time there helped shape him into who he is today.

“Any time I have a chance to explain where I come from, I do,” said John. “Overall, living in the group home was a great experience. The staff tried their best to make it like a home and I’m very appreciative of that.” Davis’ former home life, he had witnessed the effects of substance abuse, and had personally experienced physical abuse and neglect.

After being in the custody of Greene County Children Services since 2009, John turned 18 last November, joining the ranks of children who have emancipated from the foster care system without being adopted. According to multiple studies, a majority of these children end up homeless and/or unemployed due to the lack of a stable family support system. In addition, they are less likely than the general population to finish high school, and they rarely graduate from college or earn more than minimum wage if they are employed. Nearly a third are incarcerated at some point.

John is determined to not become one of these disheartening statistics, and he is well on his way to succeeding. He is currently attending Gillette College in Gillette, Wyo. He got there, in part, by way of earning a performing arts scholarship from Energy City Voices, the college’s show choir.

“I became interested in singing and dancing during my sophomore year at Beavercreek High School,” said John. “I talked a friend into trying out for a talent show with me. We did a dance duet. After seeing my performance, members of the school show choir asked me to try out so I did and I got accepted.”

The rest, as they say, is history. Davis had soon formed his own dance troupe called B-Fierce. He also signed up for acting classes and performed in musicals including Fame and Anything Goes. Extracurricular school groups he became involved in included the A Capella Choir, Peer Listening Group and Gay-Straight Alliance.

Along the way, John also used his developing leadership skills to become the President of the Overcoming Hurdles in Ohio Youth Advisory Board (OHIO YAB), a group that seeks to influence policies that affect youth in foster care. In this capacity, from October 2012 through August 2013, John spoke at a variety of conferences focused on child welfare.

When he decided to audition for the Energy City Voices scholarship, he got plenty of support: his former high school show choir director let him use the choir’s performance space and a Children Services staff member played piano.

Following his first-ever airplane flight, John began his college experience by attending Energy City Voices’ summer camp in mid-August. The camp is described on the college’s website as “just what you need to share and expand your talents, all among the beauty and nature of the Big Horn Mountains.” John described the experience as “tons of fun.”

He has easily settled into dorm life, something he found he was well prepared for from living in the group home with eight other boys for three and a half years. He shares a dorm apartment with three other members of the show choir, an arrangement he calls “a blessing.” While it was his singing and dancing talent that won him the scholarship, John is actually majoring in Social Sciences.

Becoming a choreographer is his dream, but as a back-up plan, his goal is to become a social worker. “Dance is my outlet but social work is something that’s also very important to me,” he explained. “I would love to work with children and help them through some of the same life struggles that I’ve been through. The Children Services workers in Greene County actually spent the time to work with each individual kid in the group home and focus on our individual needs. They all led me in the right direction in their own ways.”