A Youth Ombudsman Office could have saved Ma'Khia Bryant's life 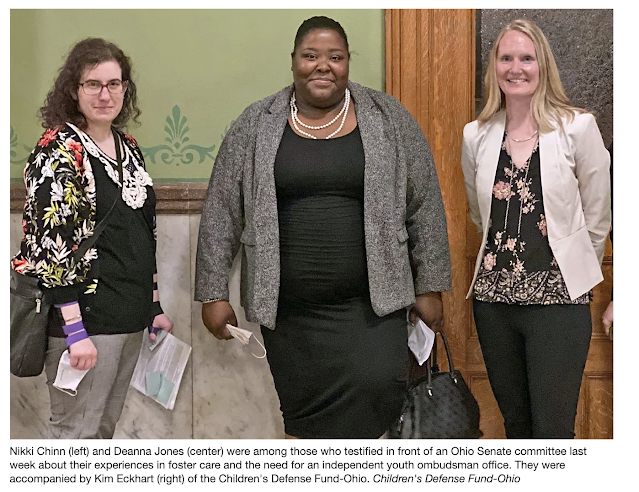 Deanna Jones stepped to a lectern in the Ohio Statehouse last week and told lawmakers that having a youth ombudsman office might have saved Ma’Khia Bryant’s life.

Jones spoke as one who, like Bryant, had been in foster care and knew from personal experience that having someone who will listen to a foster child’s concerns and take appropriate action can make all the difference.

Bryant, 16, was fatally shot by a Columbus police officer April 20 outside her Far East Side foster home. Bryant had a knife in her hand and had swung it at one woman and was threatening another when she was killed.

Exact circumstances of what led up to the incident remain unclear.

But Jones emphasized reports that Bryant and other foster children at the home appeared to be having trouble with several former foster children who had lived there, and that Bryant’s younger sister had called police in March and requested that she be removed from the home.

“I understand there are things that are debatable and that (Bryant) had a knife and that’s all some people saw,” said Jones, 39, “but honestly, I feel Ma’Khia was in survival mode, and that’s why I identified with her.”

Jones said during her rocky tenure in foster care in the 1980s and 1990s, she benefited from a sympathetic caseworker who listened to her complaints and removed her from several bad homes.

“I saw how my life could have ended if I had not had an advocate,” Jones said. “There were times when my rights and concerns were being violated, but I had someone to go to bat for me, and we don’t have that now.”

And that’s why Jones and several other former foster kids testified in front of an Ohio Senate committee last week in favor of ensuring that a newly created Youth Ombudsman Office is adequately funded and also fully independent of the Ohio Department of Job and Family Services, which oversees the foster-care system.

Deanna Jones, of the East Side, testified last week in front of an Ohio Senate committee about her experience in foster care and the importance of establishing a youth ombudsman office that is independent of the state agency that oversees Ohio's Children Services' system. 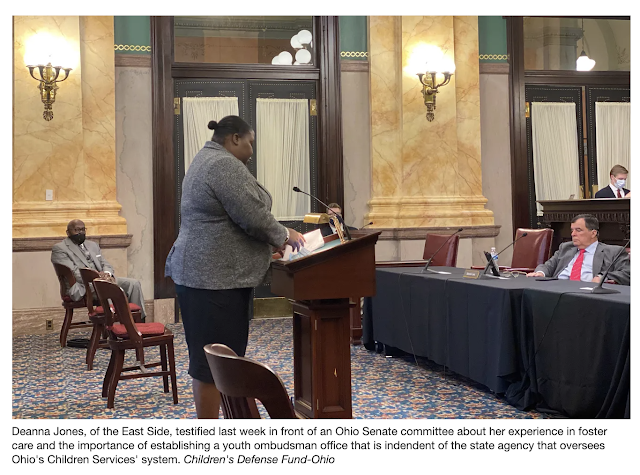 The issue is emotional to former foster kids who viewed Bryant’s death as avoidable.

“To those of us from foster care, anyone who was in foster care is our brother and sister, so losing one of our sisters is heartbreaking to us,” said Nikki Chinn, 30, a Clintonville resident who said she endured abuse and neglect in the foster-care system. “There are so many different opinions people have of the situation, but the fact of the matter is that a young girl in the foster system died, and there was no reason she should have died."

Chinn was in and out of foster care from a very young age until, at age 14, her biological parents lost all parental rights, then she remained in foster care until she aged out at 18.

In one home, Chinn said, she and four other “foster sisters” were forced to share one bedroom with a bunk bed and a mattress. They took turns sharing the beds and sleeping on the floor. Meanwhile, they were not allowed to eat without permission, she said, and there were padlocks on the kitchen cabinets and refrigerator.

Chinn said they repeatedly complained to caseworkers, but, “it got turned around on us. The foster mother was able to convince the caseworker that it was a punishment for something we did wrong." 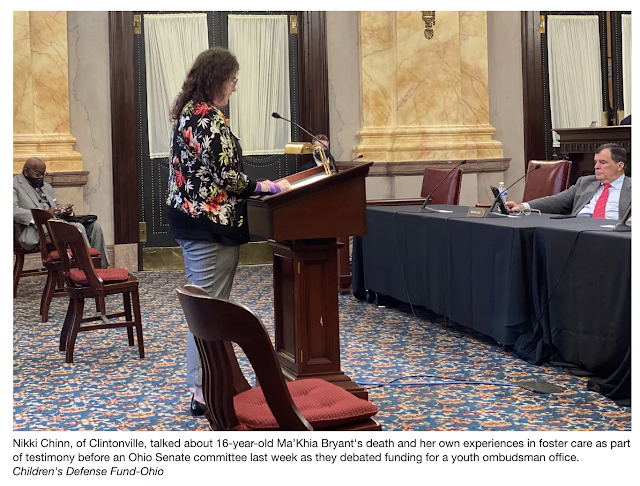 Kim Eckhart is the Kids COUNT project manager for the Children's Defense Fund-Ohio, a nonprofit organization focused on lifting kids out of poverty and protecting them from abuse and neglect.

She accompanied the former foster kids who testified last week.

“A lot of youth are blamed for being in foster care because of their behaviors, like they are responsible for the situation they are in,” she said. “They want to have someone who can really hear them from an unbiased perspective, which I hope is that this youth ombudsman office will be.”

One key state official said that will be the case. Kristi Burre is director of Children’s Initiatives for Gov. Mike DeWine and previously led DeWine’s Children Services Transformation Advisory Council, which last year included the creation of a youth ombudsman office among its 37 recommendations.

DeWine has been a strong advocate of children's services in general. He convinced lawmakers to increase Children Services' funding by $220 million in the current (2020-21) budget, and asked for another large increase ($78 million in 2022 alone) in the budget being debated now.

In February, he called for a "more compassionate and more child-centered" foster care and adoption system. "Our goal is to change the children's services system in the state of Ohio, and change it and get it right," he said.

The youth ombudsman office has a proposed budget of $1 million ($500,000 annually) for the state's next two-year budget (2022-23). That amount is a “placeholder” Burre said, and could change as lawmakers debate the budget.

“There is absolutely a sense of urgency (to set up the office),” she said. “It’s one of our top priorities.”

Burre also said she agrees with child-welfare advocates that the office will be “an impartial, neutral entity.”

According to information compiled by ACTION Ohio, a foster-care advocacy group, 21 states have youth ombudsman offices, with a wide range of structures.

The group cited the systems in Delaware, Georgia and Texas as having best practices, much of that having to do with their independence from the state agencies that oversee foster care. The office in Texas, for example, reports directly to the state's legislature and governor.

Burre said the state's proposal is that the office will be funded by the Department of Job and Family Services.

Nikki Chinn, of Clintonville, talked about 16-year-old Ma’Khia Bryant's death and her own experiences in foster care as part of testimony before an Ohio Senate committee last week as they debated funding for a youth ombudsman office.

Chinn said if the state keeps the office within that department, “it will create a conflict of interest. You can't be the prosecutor and the defense attorney for the same case. It cannot be housed under JFS. There is no way you could be impartial and be paid by the same people who paid for the foster care placement."

And like Jones, Chinn talked about Ma’Khia Bryant in her testimony to lawmakers as they debate funding for the ombudsman office.

“I used that story,” she said. “I said, `This outcome could have been changed.’ I aged out (of the foster system) in 2008, but my story is still relevant. I wanted to show them (lawmakers) that these stories are still happening today.”